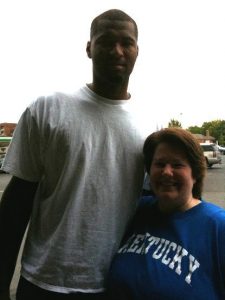 “With the fifth pick in the 2010 NBA Draft, the Sacramento Kings select… DeMarcus Cousins from the University of Kentucky.”

When David Stern said those words in July of 2010, I knew which team I’d be watching come October.

DeMarcus Cousins was my favorite University of Kentucky player from John Calipari’s inaugural team. I’ve always appreciated watching the big guys who spend most of their time in the paint. Sam Bowie, Jamaal Magloire, Nazr Mohammed, guys like that. I enjoy the wrestling matches, the furious swatting at the ball, the blocks, the dunks.

Who doesn’t love a big guy who plays like he wants to bury you on the court, then wears an Eskimo hat and big black glasses to the media scrum afterward. And when someone leaked his cell phone number and his phone was blowing up right before the Mississippi State game, he laughed about it with the media, then at the game, he mimed holding a phone up to his head and said “call me” to the opposing crowd every time he scored. And that time when he and John Wall were holding and playing with a baby at the WKYT studios, and the parents uploaded a video to YouTube.

Everything was big and ridiculous in the best and funniest possible way with DeMarcus Cousins, and I loved every second of his time here in Lexington.

So, when he was drafted to the Sacramento Kings, I was going to watch every game I could. I knew almost nothing about the NBA in 2010. I had watched a few games here and there over the years. I had traveled to Toronto with my parents and stayed in the same hotel as Team USA (Dream Team II) when they played in the World Games in 1994. I attended the movie premiere of “Blue Chips” in Walt Disney World and went to the after party hosted by Shaq. I had watched players like Michael Jordan and Reggie Miller on TV. I had seen hundreds, probably thousands, of basketball cards in my Dad’s sports card shop.

Yet, I really knew nothing.

We ordered NBA League Pass, and I committed to watch every Kings game. I bought shirts, earrings and a necklace bearing the team logo. I was in front of the TV watching games live, or watching the next day from the DVR. (Those 10:30pm starts were tough.)

That first year of Sacramento Kings basketball was pretty brutal. DeMarcus was not accustomed to losing, but the Kings lost game, after game, after game. His temper got the best of him on a regular basis. He got called for a lot of technical fouls. He did some dumb stuff. And he got a reputation as an immature hothead. National media picked up on it, and they have yet to let it go, even after six seasons.

DeMarcus isn’t perfect. No one is. That being said, it’s frustrating to tune in to a nationally televised Kings game, which are few and far between, and hear commentators use the same words and phrases they used about him during his first year in the league. It’s like they haven’t seen the changes, seen the enormous differences in both his game and his composure. He’s grown by leaps and bounds since 2010.

Why don’t they know?

Because he’s in Sacramento. And not a lot of people watch Sacramento on a voluntary basis.

The Sacramento Kings have not had a winning season since 2005-06. Their win-loss record has improved every year since DeMarcus was drafted, but they have yet to break through the .500 mark.

Since 2010, the Kings have had two different ownership groups: one led by the Maloof brothers, and one led by Vivek Ranadive.

Since 2010, the Kings have had three different general managers: Geoff Petrie, Pete D’Alessandro, and Vlade Divac.

Since 2010, the Kings have had six different head coaches: Paul Westphal, Keith Smart, Mike Malone, Tyrone Corbin, George Karl, and now, Dave Joerger. DeMarcus Cousins has been coached by six different men, and each new hire has brought a new staff, including assistants, with him.

There isn’t room here for a discussion on how many different starting lineups DeMarcus has led.

If any other NBA player has gone through this many changes in six seasons while staying with the same team, I have never heard of it.

The Sacramento Kings are the least stable organization in the entire NBA. I admit it. And they aren’t a very good team. I admit that, too. And yet, for six seasons, 82 games each, I have watched almost every game. I can count the games I’ve missed on two hands. I have had a few other favorites, but the main draw has always been Boogie.

Yes, he gets a lot of technicals. Yes, he gets ejected from time to time. Yes, he still barks at the refs almost every possession. But he’s not just some knucklehead out there collecting his check for the least amount of effort possible. No, this man has the numbers and the accolades to back it up.

He’s a two-time NBA All Star. He’s a member of gold-medal-winning 2016 Team USA. His 2015-16 averages were 26.9 points, 11.5 rebounds, and 3.3 assists per game. He averaged a double-double in his 65 games. No other King has come close to those numbers since 2010. The national media is actually starting to notice and come around.

This will be his seventh NBA season and enough is enough.

Enough waiting, enough expectation, enough demand. Enough carrying his team like he works for the US Postal Service instead of the National Basketball Association. This man has proven that he deserves more than what the media has routinely referred to as a circus for the last six seasons. He finally made it onto the All Star Team and he won gold in Rio. Now, he deserves success on a regular basis.

Now is the time to #FreeBoogie.

Rumors swirled all summer that the Boston Celtics were very interested in DeMarcus. No doubt, point guard Isaiah Thomas made a strong case to the higher-ups. Even with their boatload of 2016 draft picks, the Celtics did not acquire Boogie.

Rumors are now swirling that LaMarcus Aldridge will not be with the San Antonio Spurs for much longer. Aldridge is a nine-year NBA vet, a five-time NBA All Star, and last season he averaged 18 points, 8.5 rebounds and 1.5 assists per game. From everything I have heard, he’s a good locker room guy as well. He spent nine years with the Portland Trail Blazers before signing with the San Antonio Spurs.

Aldridge spent last season with the Spurs being groomed to step into Tim Duncan’s spot when he retired. The time has come, and now, whispers are floating around that Aldridge is not happy being the second or third choice. The team also acquired Pau Gasol over the summer, which may put Aldridge even lower on the priority list. The Spurs’ philosophy is that plays are called for the team to score, not the player. And if what’s being discussed online is true, Aldridge could leave the Spurs much faster than anyone could have anticipated.

Who could step into that center spot?

How about the best big man in the NBA?

DeMarcus Cousins as a San Antonio Spur is mutually advantageous. The Spurs fill a position with a league leader in production. Most players in the NBA have no idea what to do with him because he’s too big, too fast, too agile. Dominant. And Cousins gets the perfect coach in Gregg Popovich. Coach Pop teaches teamwork like no other coach in the league. He convinces his players to buy in completely to the team concept. It’s all for one and one for all.

Can you imagine DeMarcus with stability? Not just a good team. A stable team, with a stable coach and a stable front office. Even if Coach Pop retires after this season… one season with Pop would be better than another season of stagnancy in Sacramento.

Can you imagine the relief that he doesn’t have to carry the team anymore?

San Antonio isn’t as much franchise players as it is a team. They are a unit, a package deal. The Kings have been a revolving door of players and coaches and executives for six seasons. The Spurs are careful, calculating and championship-caliber.

The Western Conference is loaded. The Golden State Warriors are the team to beat. Their starting five have almost all become household names. That team is a monster. Most are saying that the finals will be a repeat of the one we saw a few months ago between the Cleveland Cavaliers and the Golden State Warriors.

The Playoffs are long, though, and 16 teams make the cut.

With DeMarcus Cousins, the Spurs will make the playoffs. They could make it without him, but with him? There will be no question.

DeMarcus has two seasons left on his contract. If the Kings trade him to the Spurs for LaMarcus Aldridge, would they really change that much? How different would losing DeMarcus be than losing any other player they’ve let go in the last six seasons?

It might seem unconscionable that the Kings would bid adieu to Boogie, but for a team that is constantly rebuilding castles in the sand, trading him is not outside the realm of possibility. The Kings sent another franchise player, Tyreke Evans, to the New Orleans Pelicans after four seasons. Tyreke was the 2009-10 Rookie of the Year, and was their starting point guard. Watching a franchise player leave is not something they’ve never done before.

The Sacramento Kings have a choice to make. Do they let DeMarcus Cousins walk away for nothing in 2018 when he’s an unrestricted free agent? Look at what Kevin Durant did over the summer. Think about what OKC lost in value when KD just walked away toward Oakland. Do the Kings really want to let that happen?

The Kings also have to deal with Rudy Gay, who has already stated that he will not pick up his option at the end of this season. The same question applies here: Do the Kings let Rudy walk away for nothing in 2017? My prediction is that they will trade him before 2016 is up.

My hope, my wildest dream, is that the Kings will not stop there. They’ll decide to #FreeBoogie, and he’ll end up deep in the heart of Texas.

University of Kentucky alumna. DeMarcus Cousins was my gateway into the NBA. Watching former Kentucky Wildcats thrive in the pros is the best.